In any ID system, identifying numbers—including unique ID numbers (UINs), also sometimes known as national ID numbers (NINs)—are the most basic type of identifier. They are issued automatically when a person enrolls, and their default function is to serve as a record locater or index within the system to facilitate back-end operations such as linking different tables within a database.

In the context of foundational systems, ID numbers are considered to be “unique” when:

In addition to their function as back-end identifiers, however, ID numbers have been used for authentication as a type of credential. In this role, they serve a similar function to that of a username: they are information that a person presents to a relying party—along with one or more authenticators such as biometrics, passwords, OTPs, PINs—to say “this is who I am.” The system then uses the ID number (or username) to look up the person’s record (or account) in a database and then verify the authenticators they have provided against that record. As discussed above in the case of India, using a unique ID number as an identifier during authentication could eliminate the need for physical credentials. However, there are certain limitations to this use including the need for connectivity and some people’s preferences for having physical credentials for in-person authentication.

Beyond usability, there are also important data protection concerns with using a “raw” (i.e., the root or original) ID numbers for authentication. Like user names, ID numbers can only be considered credentials in the weak sense, in that they are often widely known or easily discovered. The more these numbers are used across multiple systems, the higher the risks that they can be used to correlate information about a person. This risk is even higher when ID numbers are used as authenticators in addition to identifiers—i.e., when they are treated as a user name (identifier) in some systems, and a password (authenticator) in others. This has happened extensively in the US and UK, where—in the absence of national ID systems—social security numbers (SSNs) have become a de facto authenticator used to prove that a person is who they claim to be for services that lack a stronger authentication mechanism (e.g., asking people to provide the last four digits of their SSN when logging into online banking).

Alongside policy, regulatory, and legal controls that dictate the appropriate use of identifiers in order to avoid this type of function creep and its associated risks, technical measures should be adopted to obscure the ID number when it is used for authentication or other purposes. This may include, for example, using tokenized versions of the identity number—discussed below and in Box 21 on India’s virtual ID system—rather than the original ID number. In addition to evaluating the potential use of the ID number outside of record management, practitioners must also determine the structure of the number itself, which has implications for the system’s ability to protect privacy and personal data.

The structure of an ID number—including its format and length—require careful consideration of country context and privacy concerns. In any system, ID numbers can take one of three formats:

Historically, many countries adopted coded numbers in their national ID and civil registration systems. In part, this was an innovation that helped standardize and pre-assign these numbers in the context of paper-based systems managed simultaneously by decentralized offices. In this context, coding numbers allowed for disconnected local offices to assign (relatively) unique numbers without knowing which numbers might already have been assigned by a neighboring office. 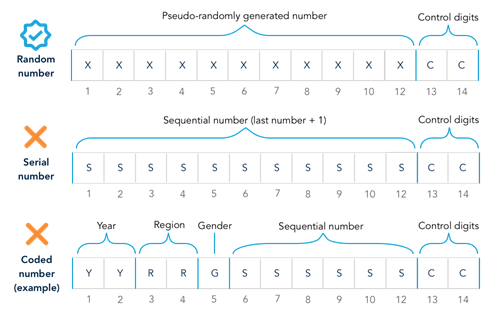 In the digital era, however, randomized numbers are the preferred choice for enhancing privacy and security. Connectivity between registration points, along with the centralized nature of deduplication and advanced computing power, mean that it is now possible to assign unique, random numbers to every person in the ID system. Random numbers offer three primary benefits over coded numbers:

In addition to format, the length of an ID number has important implications for its utility. Key factors to consider in determining length include: