Mutual recognition of IDs across borders

When IDs issued by one country are recognized by other countries—whether for face-to-face or online transactions—they become a powerful driver of economic and regional integration, including to promote safe and orderly migration. Importantly, ID systems can be mutually-recognized without the need for harmonization into a common system through the use of minimum standards to facilitate interoperability and legal and trust frameworks (e.g., for levels of assurance) to set rules and build confidence in respective systems.

A key use case is migration, through which a physical or digital identity credential can be recognized as a travel document in lieu of a traditional passport. In Latin America, for example, MERCOSUR member States recognize each other’s ID cards (which meet ICAO Doc 9303 standards as machine-readable travel documents) at borders in lieu of a passport, and a similar arrangement exists between Kenya, Rwanda and Uganda in East Africa. The benefit of recognizing cards from foundational ID systems as a travel document—particularly within regional blocs—is that they are more accessible and practical than a passport because people should have one by default, rather than a passport that requires a fee and often can only be applied for in major urban centers.

Another important use case is cross-border electronic transactions as part of the digital economy, which can be facilitated when a digital identity issued by one country is recognized for transactions online in another country. With an increasing number of transactions moving from face-to-face to online, and with the digital economy emerging as a key driver of economic growth, mutual recognition of digital identities between countries can accelerate trade in digital services and products and expand markets. For example, someone could open a bank account, register a business, and electronically sign contracts to trade in another country without ever needing to set foot in that country. The most notable example of this is the EU’s electronic Identification, Authentication and trust Services (eIDAS) regulation, which came into force in 2016 (see Box 42).

Several other regional blocs—notably the African Union (AU), the Economic Community of West African States (ECOWAS), the East African Community (EAC) (see Box 43), and Association of Southeast Asian Nations (ASEAN)—are now looking at options for mutual recognition of ID credentials across borders. Based on World Bank research, there are three broad potential architectures to facilitate mutual recognition while maintaining national sovereignty and without the need for harmonization:

The architecture and workflows of these three options are illustrated below in Figure 33, Figure 34, and Figure 35. 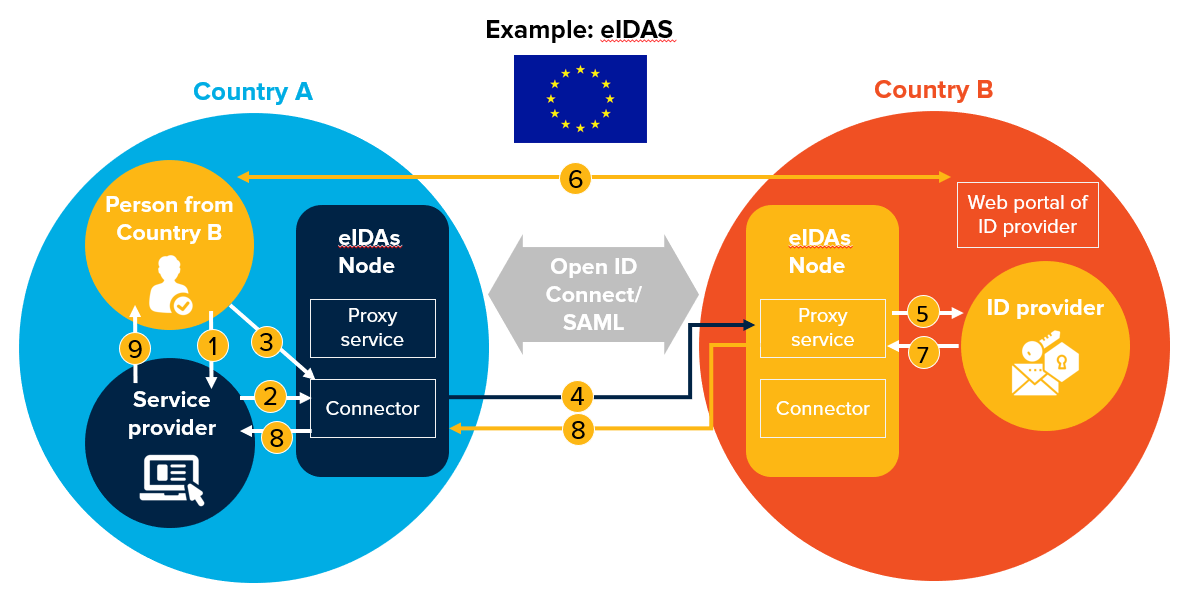